FROM A NEWS RELEASE:

Join the Pennsylvania Historical and Museum Commission (PHMC) in celebrating the commonwealth’s 336th birthday on Charter Day, Sunday, March 12, with free admission to many of the historic sites and museums along the Pennsylvania Trails of History.

Pennsylvania was created when England’s King Charles II granted a charter to William Penn in 1681. Once each year the Pennsylvania State Archives exhibits the original document, for a limited time, at the State Museum of Pennsylvania. For the remainder of the year the Charter is safeguarded in a special vault within the Archives.

In addition to the Charter, the Archives will also display the original Great Law, passed between December 4 and 7, 1682, during the General Assembly’s very first session.

The Great Law is a series of statutes that provided a stable groundwork for Pennsylvania’s representative government. Among other things, it addressed elections and taxation, and it guaranteed a greater degree of religious freedom than any other legal code of its day. Like the Charter, the Great Law is fragile and rarely displayed. It is on view this year in honor of the 335th anniversary of the General Assembly.

Additionally, State Museum Archaeologists will be talking about petroglyphs from 12:00 noon to 4:00 PM in Nature Lab. Petroglyphs are images carved into rock surfaces. These consist of lines, dots, human, animal, supernatural and symbolic designs and are a rare glimpse into the minds of ancient Native Americans.

The Pennsylvania Charter and Great Law will remain on display until 1:00 PM, Friday, March 17 at the Museum when the documents will be returned to the vault for another year.

In addition to programing at The State Museum, many historic sites and museums along the Pennsylvania Trails of History will offer free admission on Sunday, March 12.

Participating historic sites and museums include: 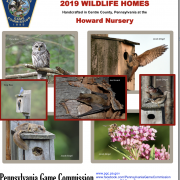 Bluebird Boxes just $11, plus shipping from the Game Commission

Schuylkill River Trail Links for JA AND SO 2017 issues

Bookstores (where to purchase Pennsylvania books)